At Hire For Hope, we optimize our own team every day, each playing to our strengths through self-awareness by using behavioral data. By knowing what each of us brings to the table, we are able to leverage, value, and appreciate one another as a unified, optimized team. We practice what we preach by living it, walking it, and breathing it.

ARE YOU READY TO OPTIMIZE YOUR TEAM? CLICK HERE

THE HIRE FOR HOPE TEAM 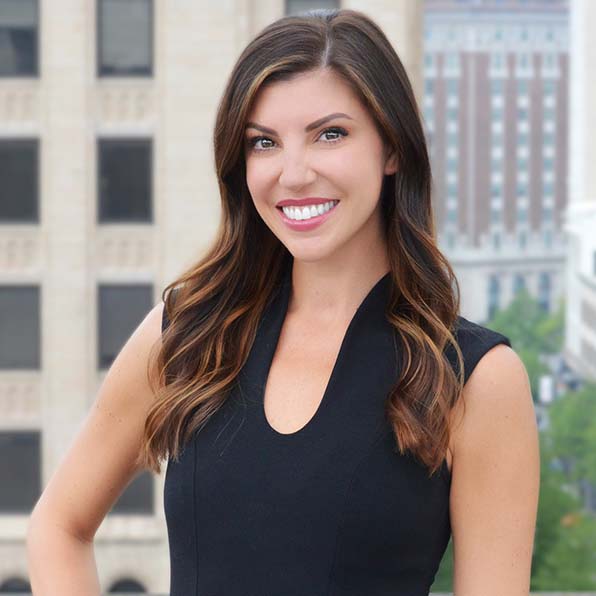 Ashley Ward is the founder and CEO of Hire For Hope. She leads community involvement, and business development and acts as the liaison between the talent optimization and recruiting departments. As a talent expert and executive recruiter, Ashley is certified in talent optimization through Predictive Index, has conducted over 20,000 interviews and has placed Presidents and CEOs throughout West Michigan. Ashley founded Hire For Hope in 2017 with a mission to start a philanthropic business that gives ten percent of its profit to nonprofits that empower women experiencing domestic violence.

Prior to founding Hire For Hope, Ashley was an executive recruiter for a boutique headhunting firm. She also worked for a freight brokerage business based in Cincinnati and recruited the founding team for the new Grand Rapids office. Previous to her work there, she spearheaded the recruiting efforts for a national insurance company based in Grand Rapids.

Ashley received her bachelor’s degree in psychology from Cornerstone University and advanced through graduate coursework in counseling.

Ashley serves on several executive boards in the West Michigan community. She currently serves on The City of Grand Rapids’ Downtown Improvement District Board and Grand Rapids Sister Cities International Zapopan Committee. She previously served on the Board for Safe Haven Ministries where she chaired their Corporate Impact Committee, as well as the City of Grand Rapids’ Mayor’s Next Gen Advisory Board. She is also an avid angel investor and the Director of Grand Angels, a local chapter of Michigan Capital Network, a venture capital group.

As a seven on the enneagram, Ashley loves to seek adventure. She has a passion for spending time with her daughter, traveling on her husband’s private jets to their second home in Florida, has been skydiving three times, and enjoys cooking, yoga, and upping her chess game. She is also a writer and has had articles featured in West Michigan Woman Magazine, Northern Michigan Woman Magazine, and NBC’s TODAY. Ashley’s five-year goal includes expanding her businesses to warmer climates. 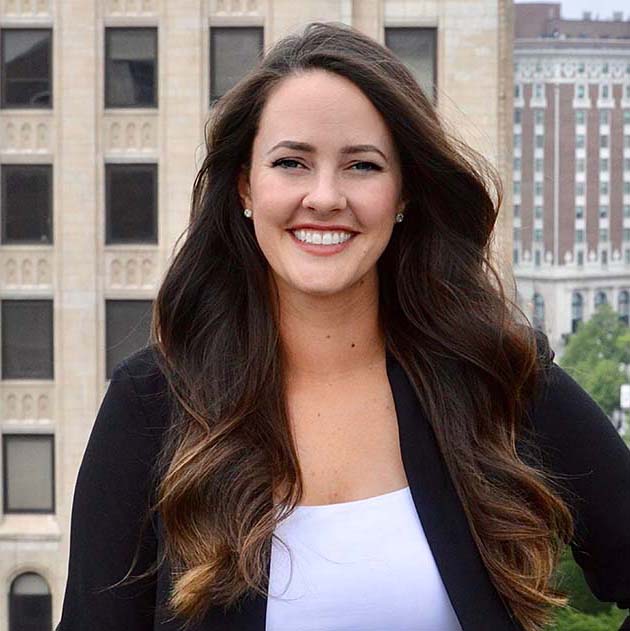 Tasia is the managing director at Hire for Hope. She helps set our direction for delivering the highest caliber recruiting and talent services and oversees our recruiting, consulting, and operations teams.

Tasia is highly experienced in technical, financial, and manufacturing and executive recruiting and serves as a talent and human resources consultant to many local and national clients at Hire for Hope.

She brings over a decade of experience in organizational development, leadership coaching and recruitment strategies. Tasia has worked previously in manufacturing, financial services, and consulting and loves the variety and unique challenges that each industry presents.  She has experience bringing the best and brightest talent optimization tools to the workforce to improve engagement, retention, and productivity — from performance management processes to employee psychometrics, talent development and retention initiatives, she brings a host of unique and creative ideas to help other organizations solve their talent challenges.

Tasia and her husband have been sponsoring kids through Compassion International and Food for the Hungry for the last 10 years.

As an East Coast native, Tasia grew up a frequent traveler with more wings than roots. She’s spent time exploring every state in the US except, Hawaii, has had 15 permanent addresses and even spent a little time growing up in Saltillo, Coahuila, Mexico. In her free time, Tasia enjoys boating and camping with her husband and their two Dalmatians. A fun fact about Tasia is that she enjoys DIY projects and recently built a pantry in her kitchen! 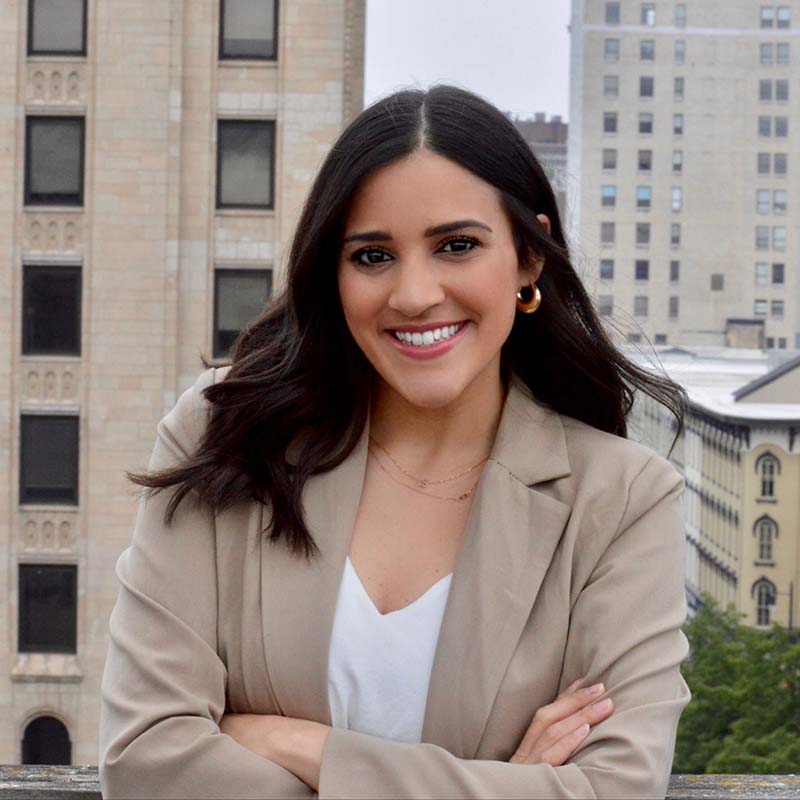 Nicole is an executive recruiter and talent consultant at Hire for Hope. She creates new opportunities for Hire for Hope through sales meetings and relationship building. She also handles sourcing a broad range of high-quality professionals and interviewing them to determine the best fit for our clients across West Michigan and beyond. Nicole is certified in talent optimization through Predictive Index. In her time at Hire for Hope, she has conducted nearly 1,000 candidate interviews and has found our clients countless of qualified hires including VP of HR, HR Manager, Process Engineer, Engineering Leader and Community Development Officer.

Prior to joining the Hire for Hope team, Nicole built and grew local and national relationships with a large client bases across multiple industries. Nicole was recognized for four consecutive years for her outstanding performance.

Nicole graduated from Northwood University with a bachelor’s degree in marketing and management.

She is actively involved in the West Michigan community spending her time volunteering & being involved in numerous committees including LaughFest, Wine & Wig, Kid’s Food Basket and the American Cancer Society. Nicole and her husband host a yearly virtual 5K fundraiser for The Skin Cancer Foundation each May.

Outside of work, you can find Nicole spending time with her husband, new baby and dog, She loves traveling, reading and seeking out the best Michigan sunsets! 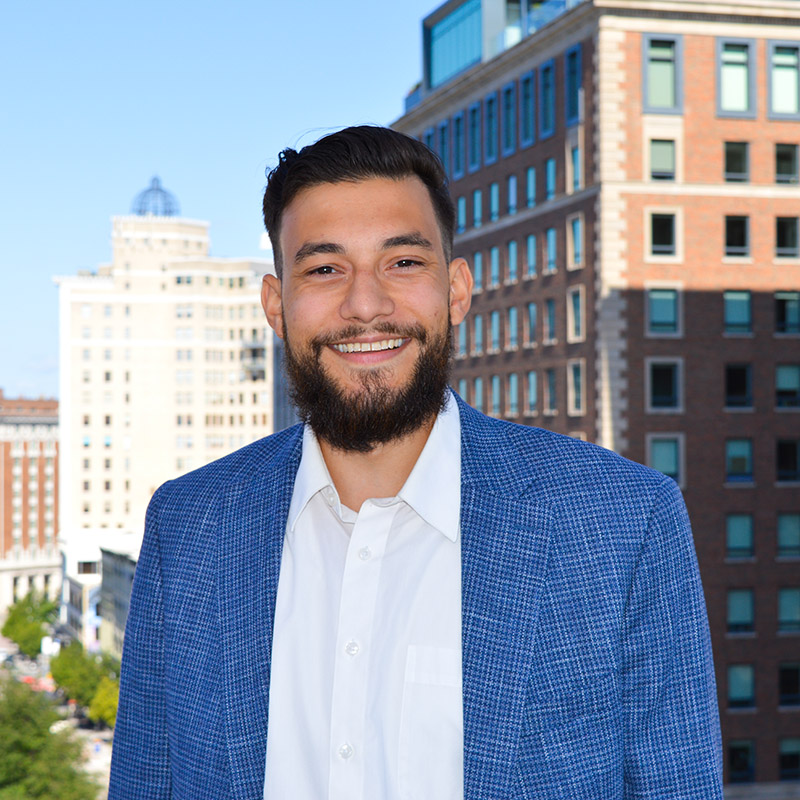 Asad is an executive recruiter at Hire for Hope. He sources and recruits top talent for our clients across West Michigan and helps people land their dream roles.

Asad’s previous experience is in relationship building and account management. Asad is passionate about making a difference for businesses and the local community throughout his career and enjoys continuing to make an impact at Hire for Hope.

He has been involved with Kids’ Food Basket as a volunteer and is now volunteering with the YWCA to support Hire for Hope’s mission.

Always looking for a challenge, Asad spends his time outside of work on home and yard improvement projects or golfing with his friends and girlfriend. Either way, you can find him taking any chance he can to get outside and enjoy the company of his friends and family. 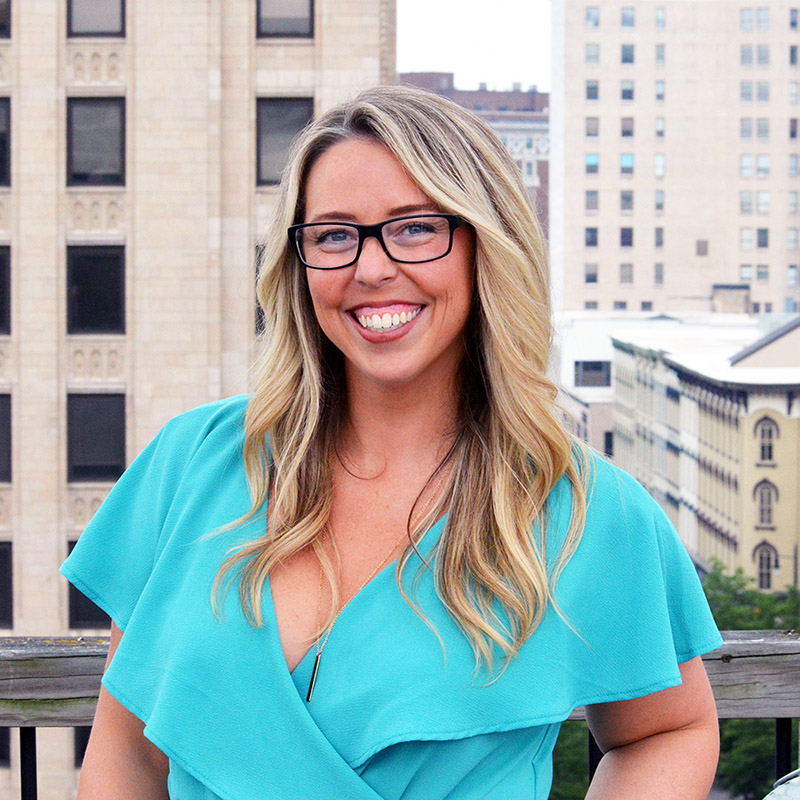 Lauren is an executive recruiter at Hire for Hope. In her role, she finds and connects with top talent who possess the head, heart and briefcase that our client needs to complete their team. Lauren is Predictive Index certified, has conducted over 500 interviews for Hire for Hope and is proud to have placed two women in top engineering roles in Grand Rapids.

Lauren previously worked in employee benefits for five years where she helped organizations streamline their benefit processes and create a smoother onboarding for employees.

With a passion for people, Lauren enjoys connecting to other professionals throughout West Michigan through the Grand Rapids Chamber. She also is proud to actively contribute to the community impact that Hire for Hope is involved with through the YWCA.

Outside of work, Lauren enjoys music, meditation and yoga, spending time with her close-knit family, cheering on the Michigan State Spartans, and catching a barre class at The Barre Code. She recently discovered her new favorite spot, Jackson Hole, and is now an avid fan of a mountain range and discovering new places through travel. 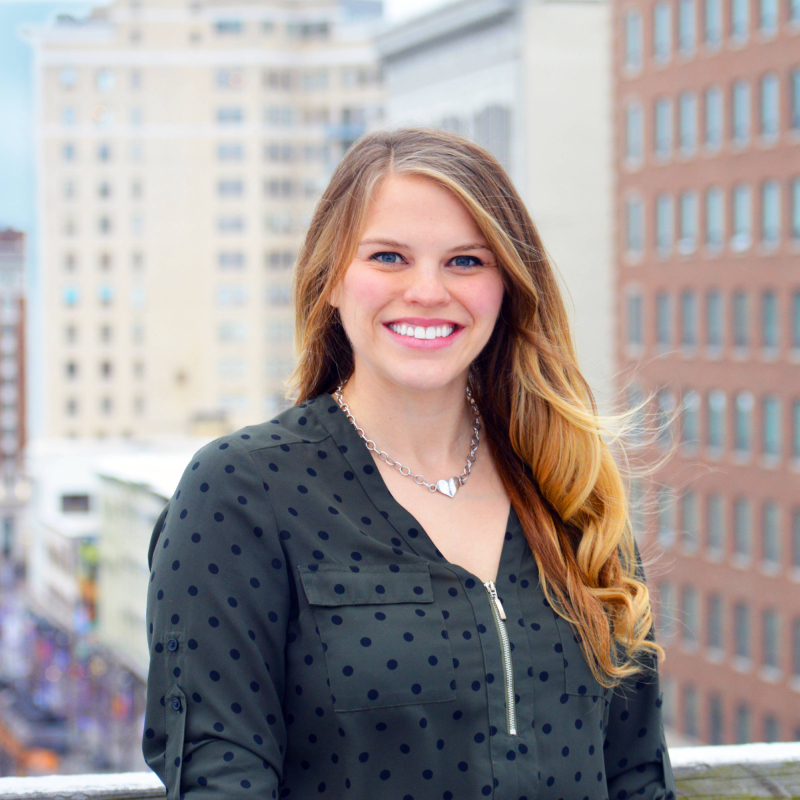 Emily is an executive recruiter at Hire for Hope. Emily finds and attracts ideal candidates to fill our client’s open roles and help them bring their organizations to the next level.

She received her bachelor’s degree in business administration with a concentration in human resources from Bradley University in Peoria, IL.

Emily has volunteered with Friendship International, a Christian organization that helps international students at colleges across West Michigan adapt to life in the United States. She has enjoyed being paired with students from Vietnam, Japan, India, China and Germany over the past four years.

In her spare time, Emily enjoys learning to make new recipes from all over the world and spending time with her husband and daughter. 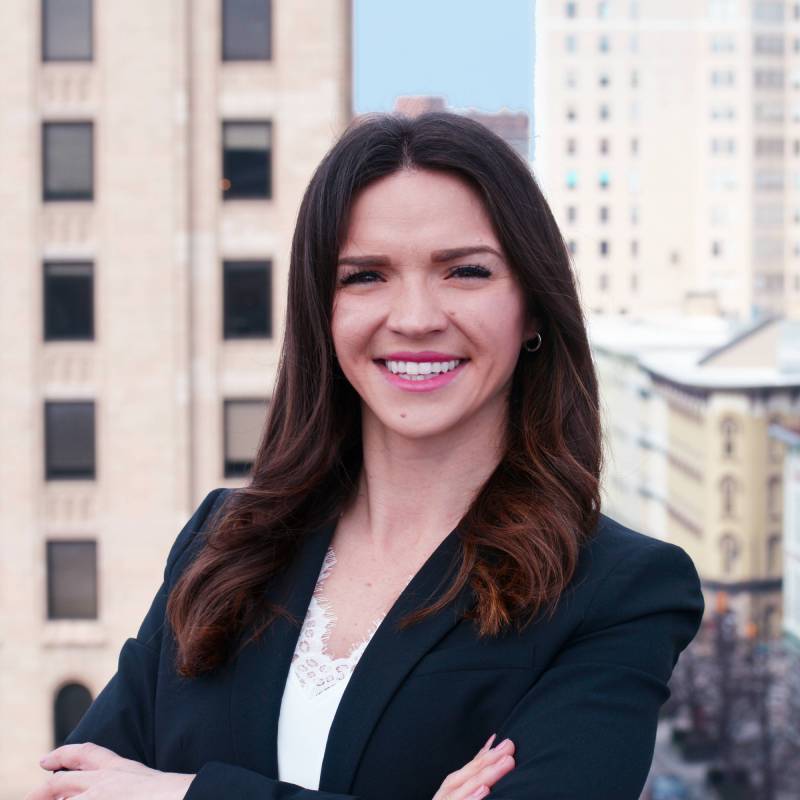 Krystal is Hire for Hope’s executive talent specialist. In this role, Krystal is responsible for identifying candidates that meet and exceed our client’s needs and expectations.

Before joining Hire for Hope, Krystal worked in non-profit and talent development in roles ranging from operations management to human resources and workforce development. She has served in the Michigan Army National Guard for the past eleven years, first as an engineer and now as a chaplain assistant.

Krystal took classes through Kendall and GVSU and received her bachelor’s degree in studio art with a focus in graphic design from GVSU.

An avid volunteer, Krystal has enjoyed eight years of participating in and leading clubs through Toastmasters International. Having adopted a son, she is passionate about advocating for adoption and is involved in several local adoption support groups. She also is a heavy supporter of children in Africa through World Vision, a passion that began through her husband’s time serving on a medical ship in West Africa. Previously, Krystal served as a full-time volunteer with a local non-profit through AmeriCorps and was a pageant participant in Miss Michigan and Miss America’s scholarship programs.

Krystal fuels her work and community involvement by taking time for reading, hiking and her family, which includes her husband, son and one 110-pound fluffy dog. Krystal recently purchased a Peloton and is enjoying her newfound love for indoor cycling classes from home.

Amanda is Hire for Hope’s business administration manager. In this role, she serves as the culture ambassador, human resources manager and finance manager. Amanda is tasked with overseeing accounts payable, accounts receivable, reporting, budgeting, employee payroll,  benefits and onboarding. She also supports vendor relations business strategy and any other administrative functions that arise.

Before joining Hire for Hope, Amanda served for three and a half years as the office administrator at Downtown Grand Rapids, Inc.

An Ohio native, Amanda received her bachelor’s degree in finance and marketing from The Ohio State University and recently completed the SHRM Essentials of Human Resources certification course.

Amanda has been involved in several fundraising events with Safe Haven Ministries as the beneficiary through “Running For Jenny” at the Riverbank Run, which she’s run for years. She is also a parent volunteer at her children’s school, Algoma Christian School. Amanda is thrilled to continue her community involvement through Hire for Hope’s partnership with the YWCA.

Amanda has a passion for health and wellness and in 2015, in addition to being a stay-at-home parent, Amanda started her own small business, A Mother’s Nature, where she crafts artisan health and beauty care products using all-natural ingredients including therapeutic grade essential oils. She loves running, singing, playing board games with her spouse and three children, and drinking a good red wine. Her favorite? A Pinot Noir from Willamette Valley, OR. 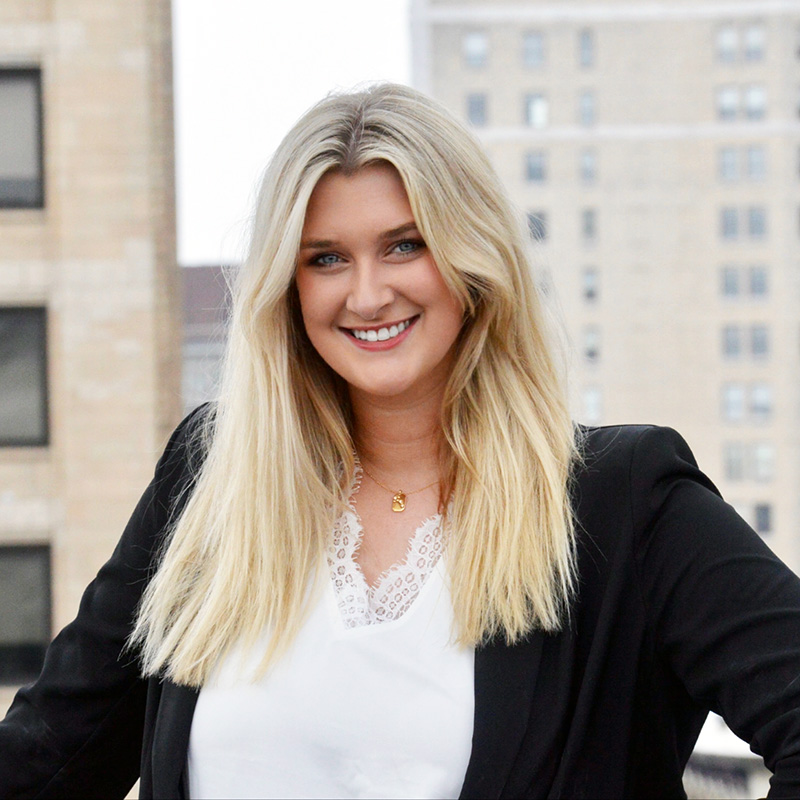 Kayla is Hire for Hope’s human resources assistant. She helps us source, recruit, optimize talent, and everything in between.

Kayla was previously Hire for Hope’s human resources and marketing intern. During her internship, Kayla’s work was published in a local magazine and she also wrote our all-time top-performing article, Inspirational Quotes for Recruiters. Before joining Hire for Hope, Kayla worked as an accounting clerk where she handled billing and invoicing.

Kayla graduated from Grand Valley State University with her bachelor’s degree in human resource management. She chose to go into human resources so she can pair her business mind with her passion to help others.

She loves volunteering and is actively involved in our partnership with the YWCA. She also volunteers at her church and leads children’s worship.

Kayla also spends her time outside of work appreciating the arts. She dabbles in photography and attends any form of live entertainment like plays, musicals, or concerts.